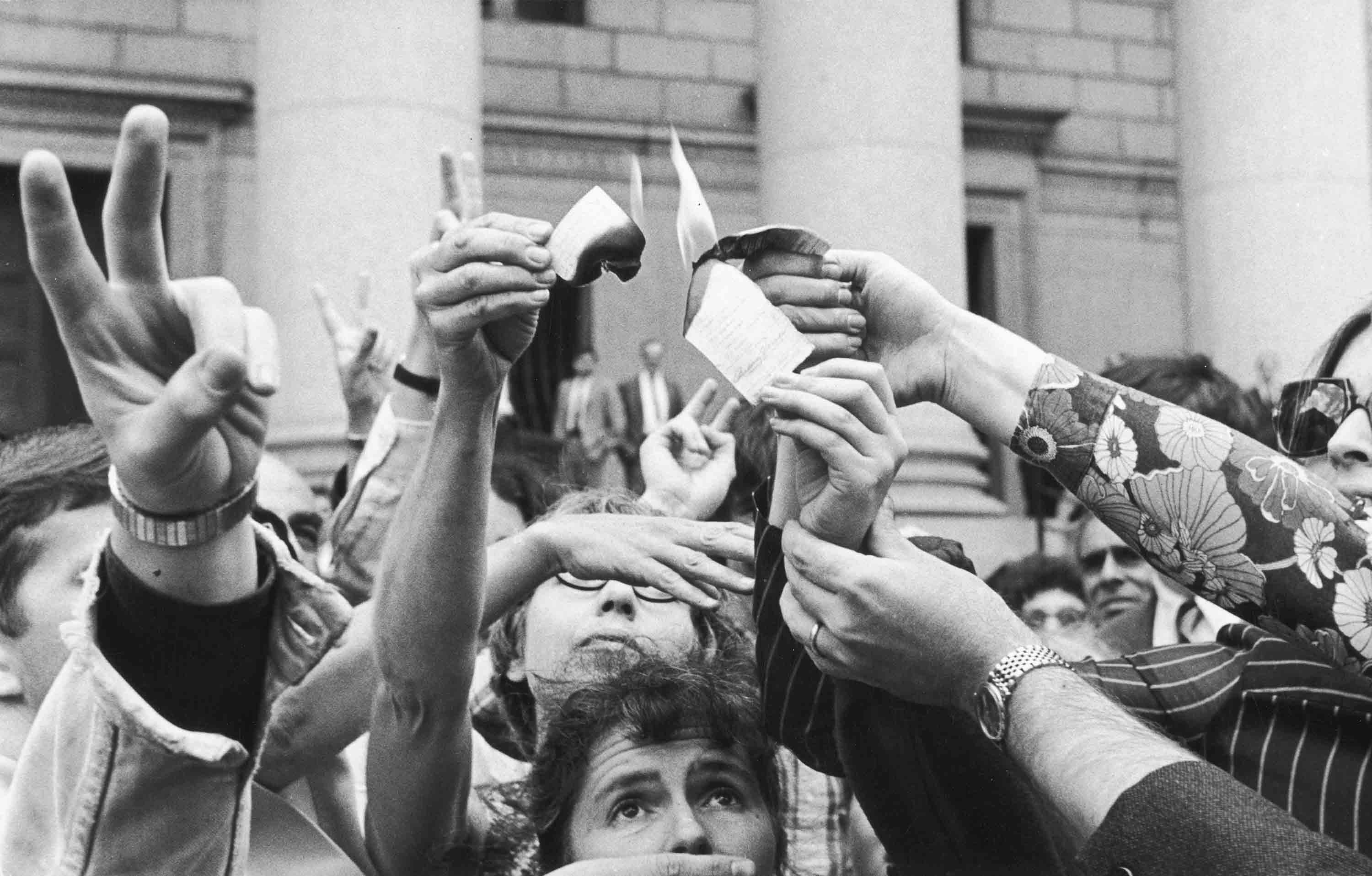 For more than fifty years Fred W. McDarrah served as the Village Voice’s photographer, and later, photo editor. In that time McDarrah covered a panoply of events in the visual arts, music, culture, and politics, to name a few. Assignments took McDarrah to neighborhoods all over New York City and beyond, but some of his strongest images were captured during the tumultuous 1960s and 70s. As the War in Vietnam, civil rights and cultural politics roiled the nation McDarrah created numerous iconic photographs that reflected the collective experience of the moment. 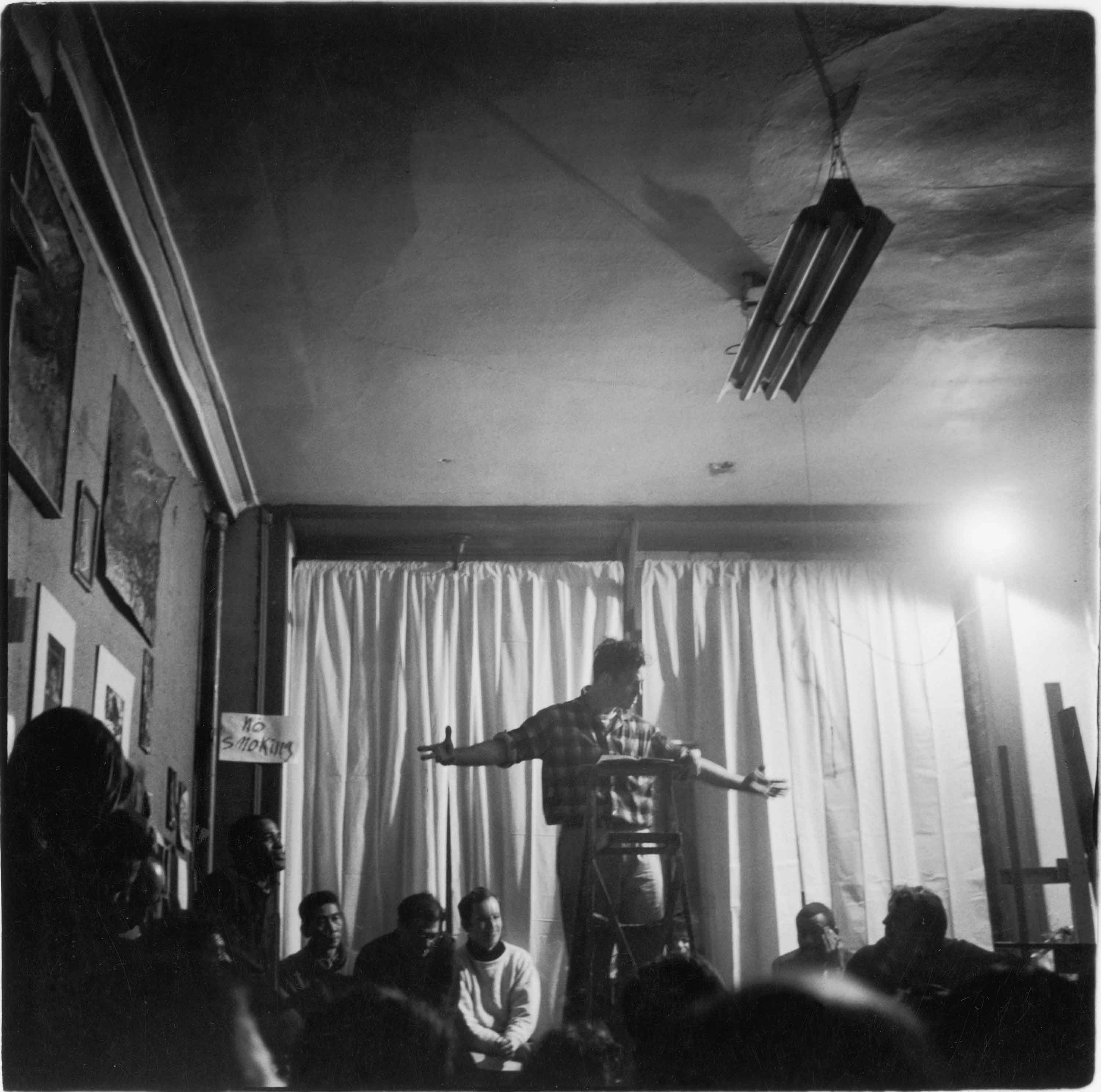 Jack Kerouac Reading Poetry at the Artist’s Studio, New York City, February 15, 1959
Initially, McDarrah concentrated his photographic efforts within his bohemian community of Greenwich Village by documenting the rise of Abstract Expressionism and Pop Art, Beat poetry, and folk music in local cafés and clubs. McDarrah moved to the Village soon after serving in the Armed Forces during World War II and was quickly introduced to the Beats, socializing with Jack Kerouac, Allen Ginsberg, and William S. Burroughs amongst others who were standard-bearers for the beat movement. The Beats sought to use their words and their lifestyle as a counterweight to the cultural norms of the Eisenhower era
As McDarrah recalled in 1996, “They wanted to be visible, admired, heard and loved. They all had something to say, because they were the first of the postwar generation that rebelled against society. ... In the 1950s, they believed they were chosen to ... espouse the philosophy of living to their true feeling, stripping the mask of hypocrisy from a culture long weighed down by the traditional dogma of family, church, and state.” McDarrah shared this worldview and it clearly affected his photography, as he was particularly sympathetic to the emerging liberation movements of the 1960s and 70s and provided a steady stream of images to the Village Voice. 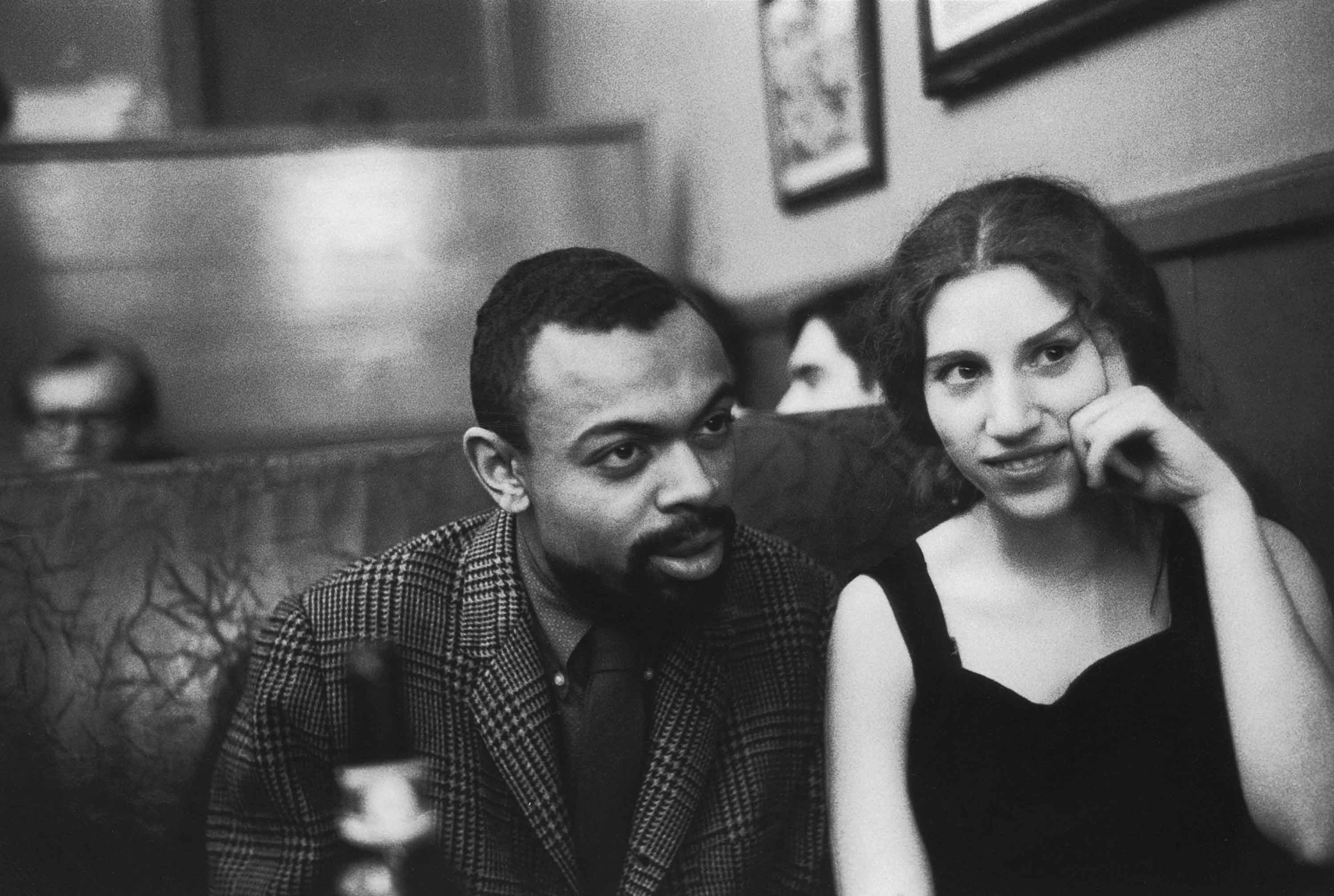 LeRoi Jones (later known as Amiri Baraka) and Diana Di Prima at Cedar Street Tavern, New York City, April 5, 1960
In 1961 E. P. Dutton published McDarrah’s first book, The Artist’s World in Pictures, a visual examination of bohemian artist life in New York in the late 1950s. Less than a year later (1962) he formally became the Village Voice’s staff photographer. He quickly expanded his field of vision, documenting members of the Village Independent Democrats, an anti-Tammany group that included a young Ed Koch, local politicians, and mayors Robert F. Wagner and John V. Lindsay. Popular activism also began to appear in McDarrah’s photographs with images of protests led by Dorothy Day and the Catholic Workers who advocated the use of civil disobedience and direct aid to benefit the poor, or Jane Jacobs, Martin Berger, and Rachel Wall at a protest against Robert Moses’ proposed Broome Street Expressway in 1962. This early work spoke mostly to local politics. 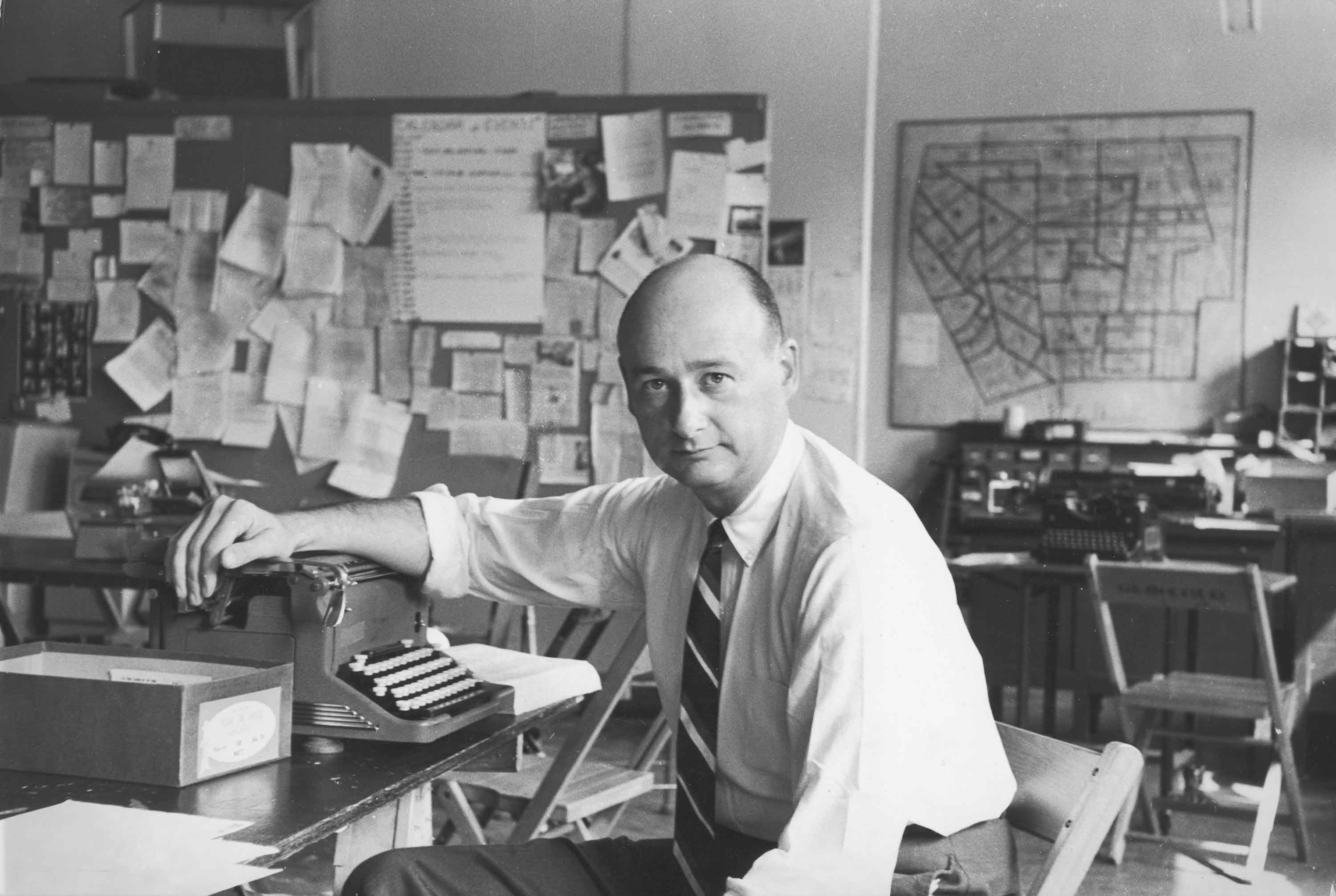 Ed Koch in the Democratic Office at Sheridan Square, New York City, August 24, 1963
It is important to note that within New York City, McDarrah was a known entity because he was virtually everywhere. His coverage of events spanned all levels of society. He was a recognized figure at gallery openings, press conferences, and protest marches. A subject might even give him an extra moment or two to get the photograph.
As the 1960s wore on, the news coverage in the Voice, and in McDarrah’s work, broadened. By 1967 the Voice was the bestselling weekly newspaper in America, with a circulation higher than 95 percent of the big city dailies. The mission of the paper expanded to cover the goings-on of the wider city and eventually the nation, from “happenings” and “be-ins,” to elections and political conventions, to activism against the war in Vietnam, and the fight for equal rights and civil liberties. McDarrah attended press conferences, covered events at City Hall, and documented local, state, and federal election cycles. National and international politics became a wider focus for both McDarrah and the Village Voice. McDarrah captured Robert Kennedy campaigning in New York City, Fidel Castro speaking at the United Nations, and the tumultuous 1968 national party conventions.
Robert F. Kennedy (RFK) Tours a Tenement House in Manhattan’s Lower East Side, May 8, 1967
Fidel Castro Addresses the 34th General Assembly of the United Nations, New York City, October 12, 1979
Military Personnel Deployed to Quell Demonstrations during the 1968 Democratic National Convention, Chicago, Illinois, August 27, 1968 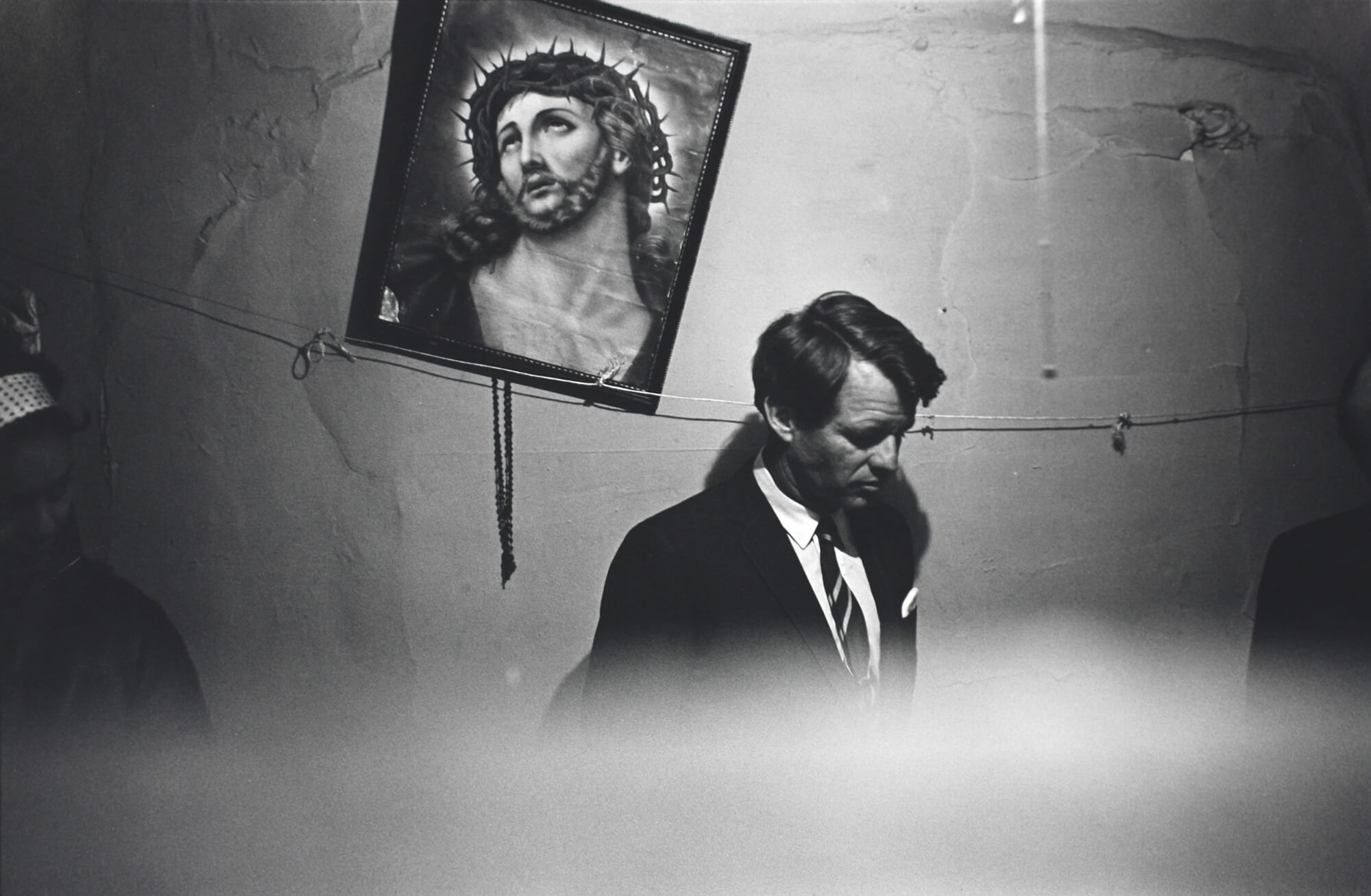 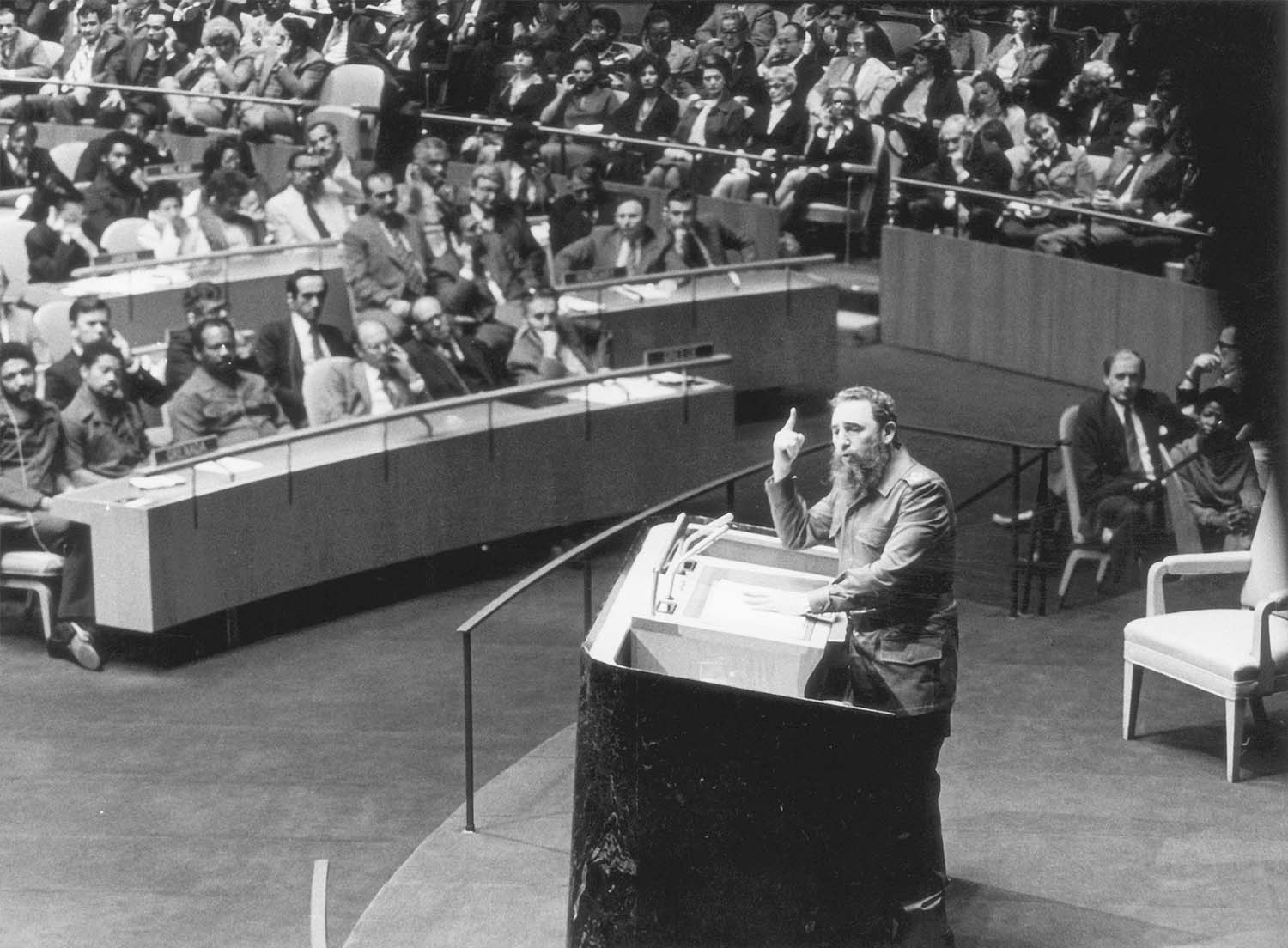 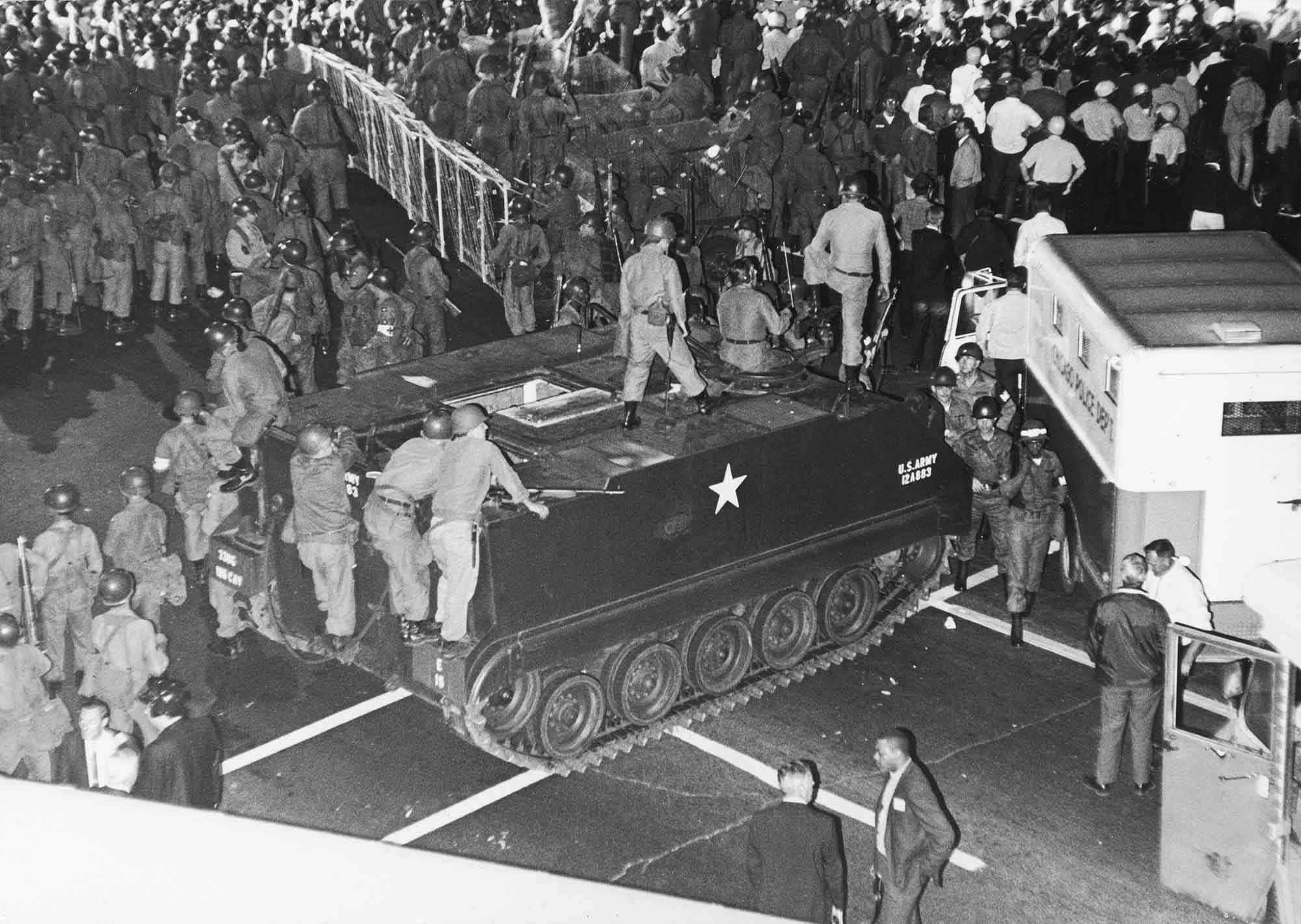 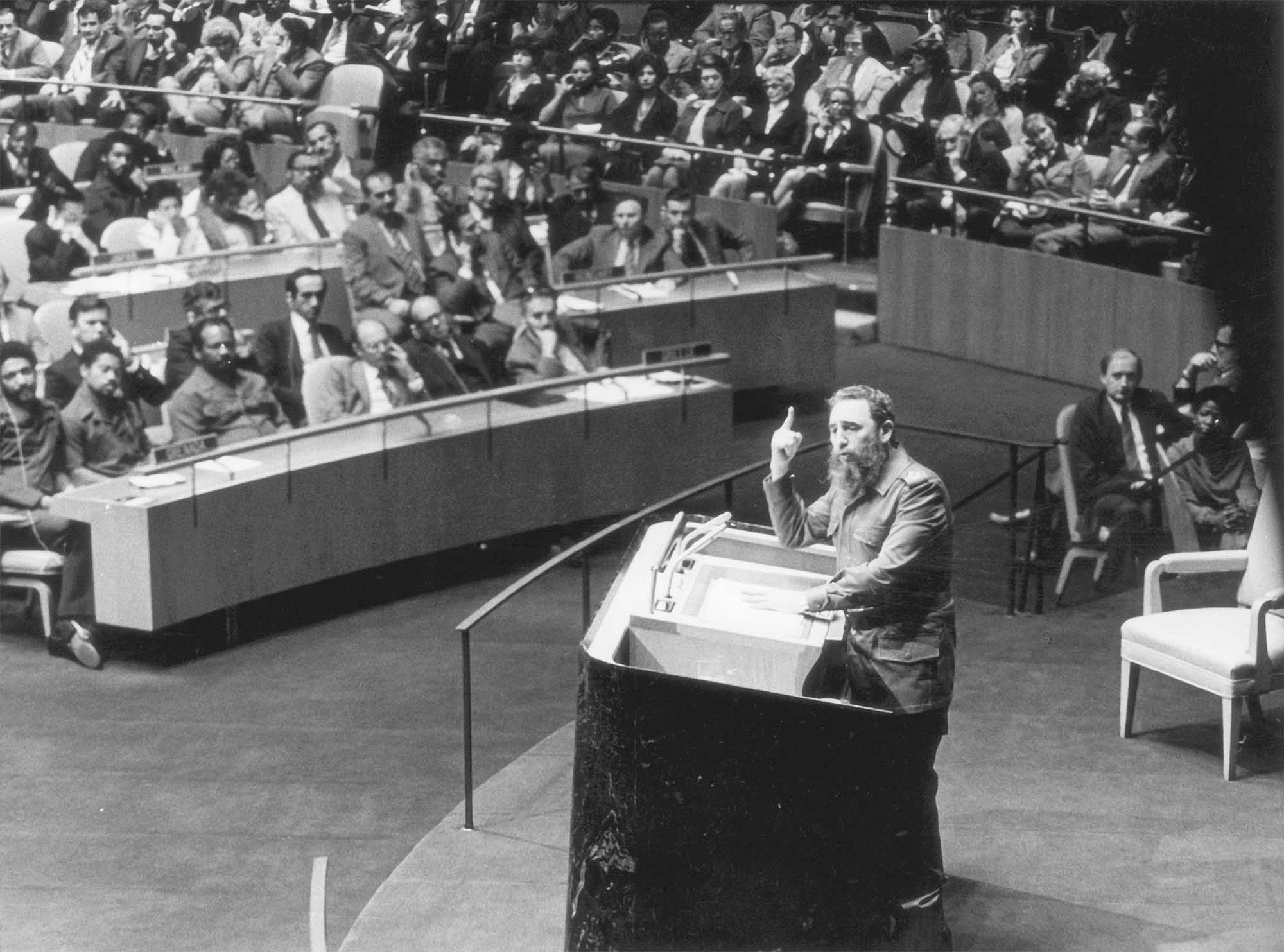 In every situation, McDarrah was determined to get the shot; in the words of Voice writer Nat Hentoff, “Nobody could intimidate him.” The resulting photographs embody the impact of the decade’s counterculture, antiwar, and liberation movements on mainstream politics and politicians. 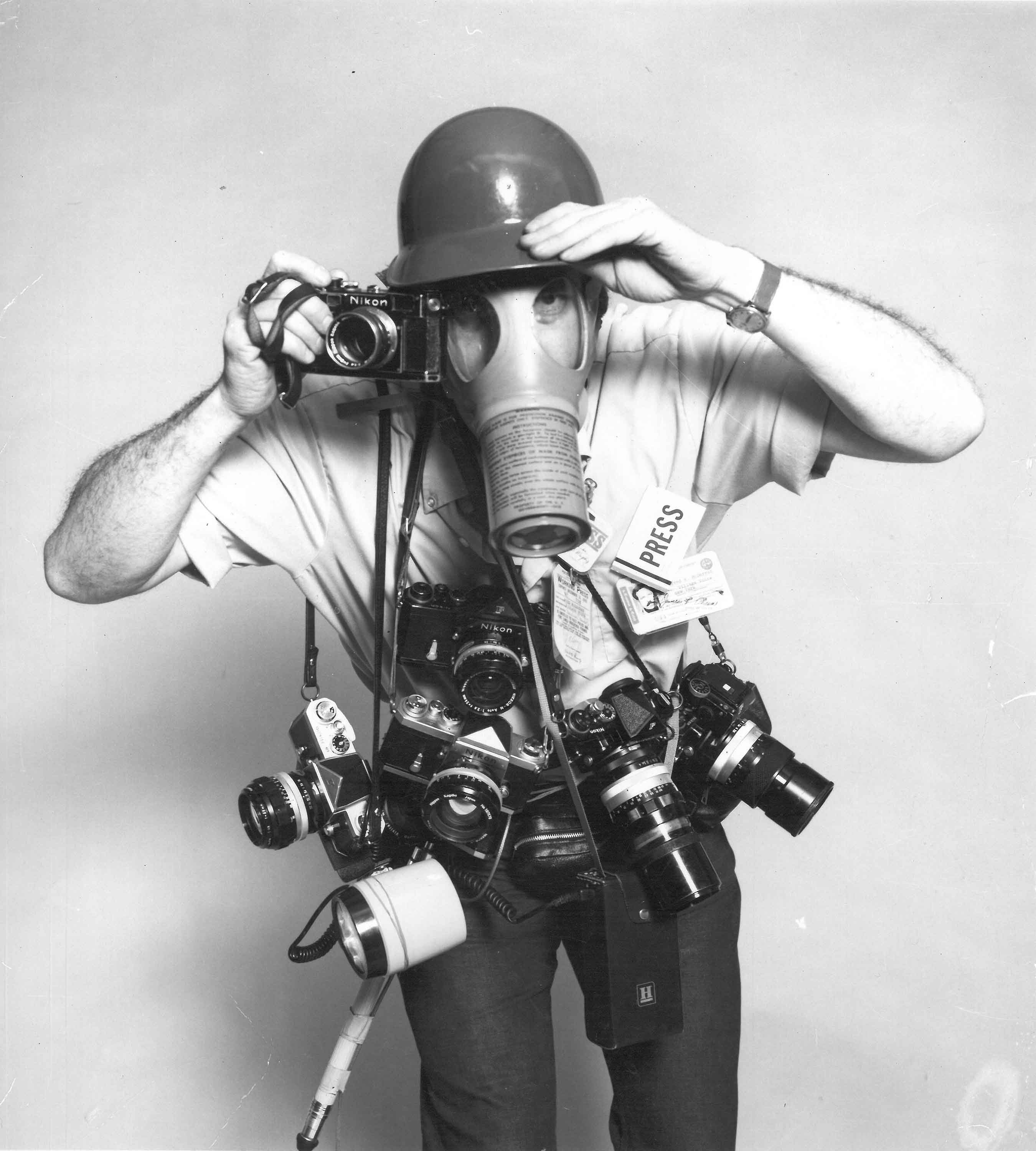 Fred W. McDarrah Poses as a Fully-Equipped Press Photographer Before the 1968 DNC in Chicago, Illinois, 1968. Photograph by Abner Symons.
The movement against the United States’ involvement in Vietnam changed everything – including McDarrah’s photographs. Popular politics and culture in New York would never be the same, catapulting previously fringe ideas and people onto center stage. Many figures long associated with downtown arts and culture, from Allen Ginsberg to Abbie Hoffman, mobilized against the war, sometimes combining efforts with established politicians like Robert Kennedy and civil rights leader Martin Luther King Jr. to publicly speak out against the war. In McDarrah’s photographs, we see the evolution of the antiwar movement, from its humble beginnings in the 1960 protests of David McReynolds and the War Resisters League on a Village street corner, to the 500,000 protestors who gathered for the Spring Mobilization to end the War in Vietnam on April 15, 1967. 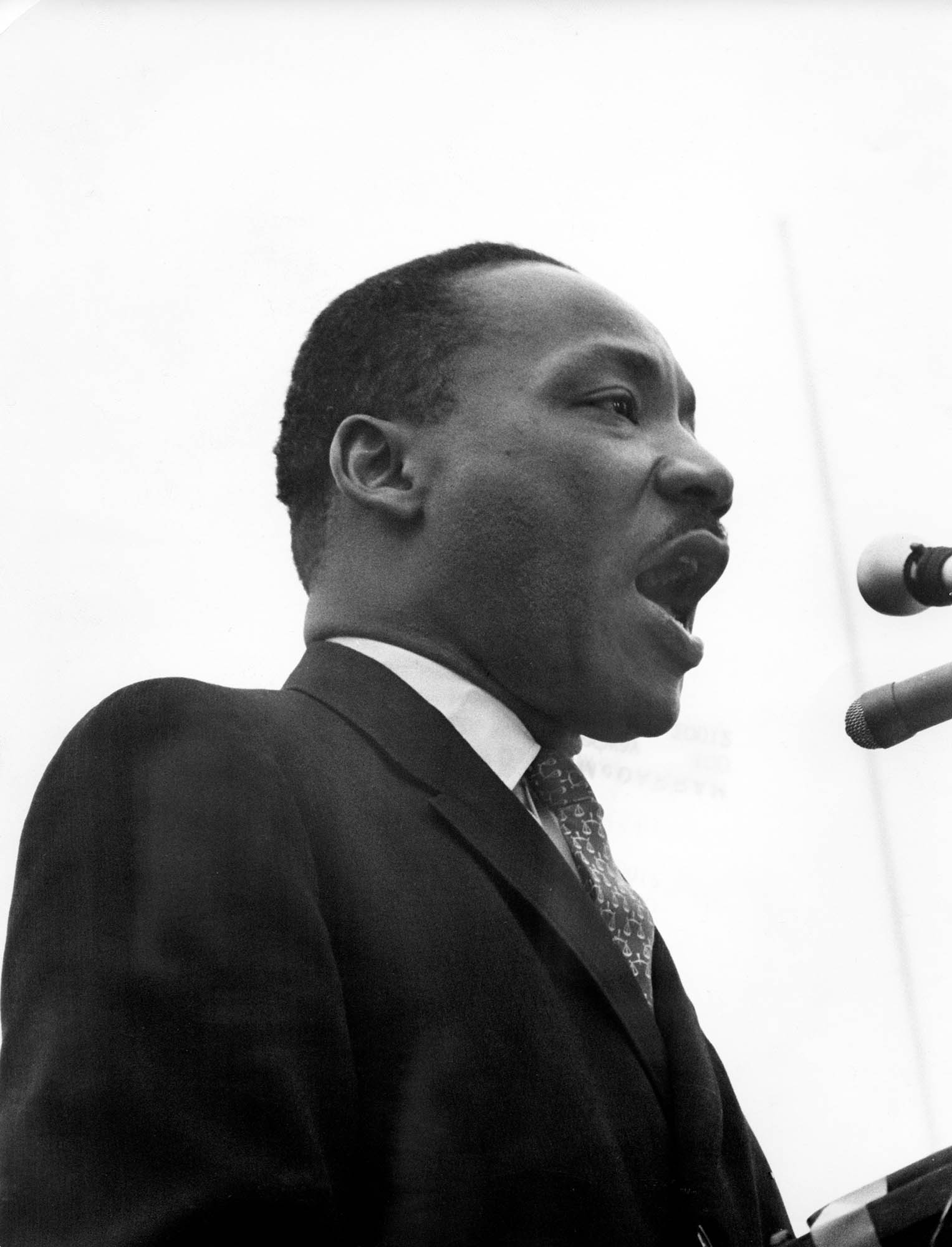 Dr. King Speaks at Anti-War Rally at the United Nations Plaza, New York City, April 15, 1967.
On that historic day, McDarrah photographed the crowds in Central Park and followed as they marched to the United Nations. There, Martin Luther King Jr. and Stokely Carmichael amongst others spoke out against the war. Throughout the 1960s, McDarrah continually photographed both crowds and individuals, for and against the war. 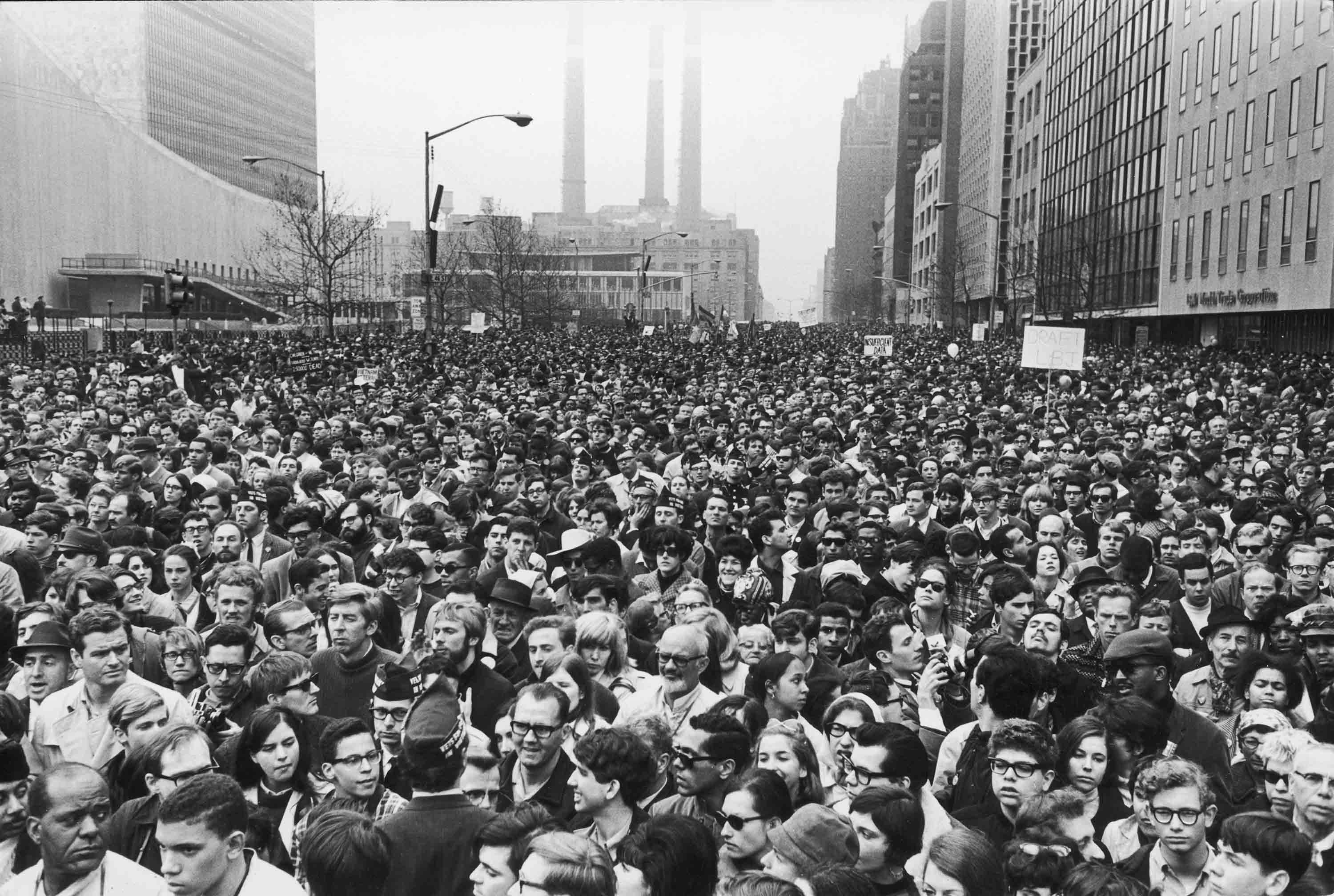 March Against the War in Vietnam, New York City, April 15, 1967
On May 8, 1970, McDarrah captured an altercation between approximately 200 construction workers and 1,000 protestors—mostly college and high school students—near the intersection of Wall Street and Broad Street in Lower Manhattan, that became known as the “Hard Hat Rally.” The protesters had gathered in response to the Kent State shootings in Ohio that occurred just four days earlier, and President Richard Nixon’s announcement that the US would invade Cambodia. In contrast, the construction workers voiced pro- America and pro-War sentiments. Over 70 people were injured, including four police officers. Through McDarrah’s photographs the pages of the Village Voice reflected a divided country’s opinions on the conflict, as it exploded into mainstream discourse. 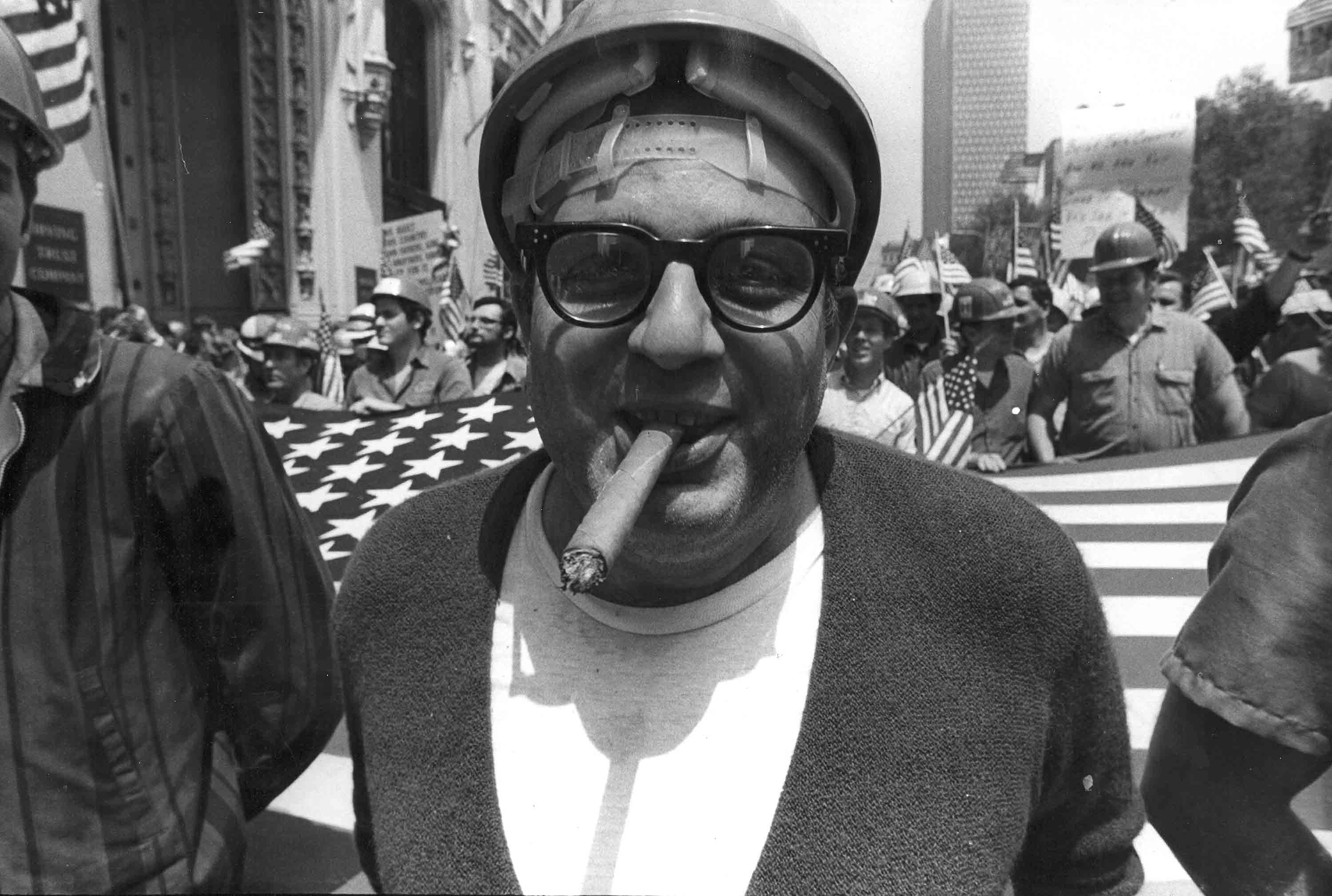 “Hard Hat Rally” to Support the War in Vietnam, New York City, May 20, 1970
Simultaneous to the increasing divide across the nation, millions were influenced and inspired by the activism of the civil rights and antiwar movements of the 1960s, giving way to a new wave of vocal advocates for social, political, and environmental change. Organizations such as the Black Panther Party, the Young Lords, the National Organization for Women, and the Gay Liberation Front fought discrimination based on racial, gender, and sexual identity. These advocates fought on the streets and in the media, courtrooms, and legislative chambers for both social and legal remedies, intertwining grass roots activism with electoral politics. Once again, McDarrah was on the frontlines and caught many of these movements on film.
Vietnam Veterans Demonstrate at U.S. Capitol in Washington D.C., April 23, 1971
Pablo ‘Yorba’ Guzman, Minister of Information for the Young Lords Party, at the Young Lords political headquarters, New York City, November 28, 1969
March to Commemorate the 50th Anniversary of Women’s Suffrage in the United States, New York City, August 26, 1970 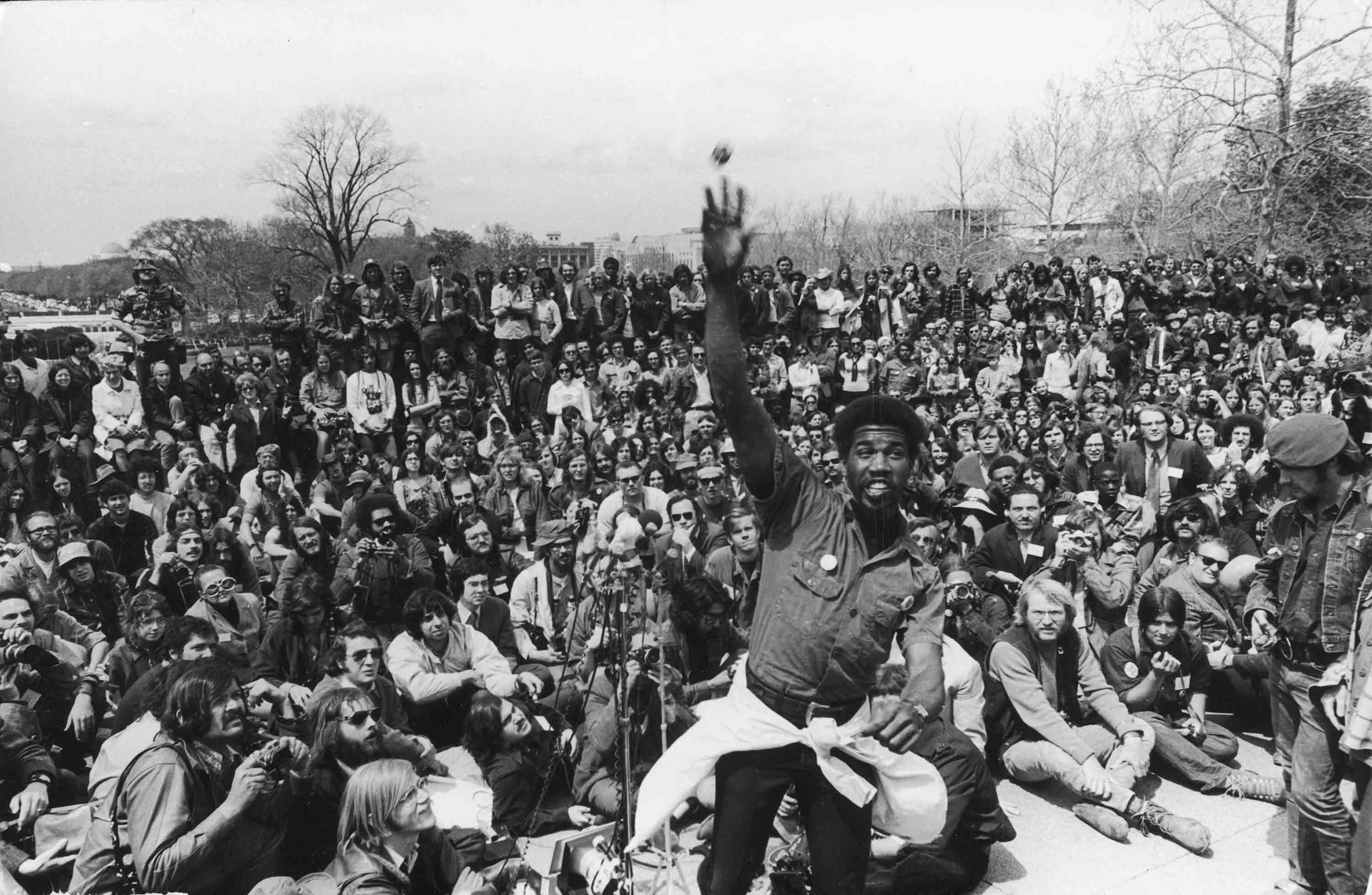 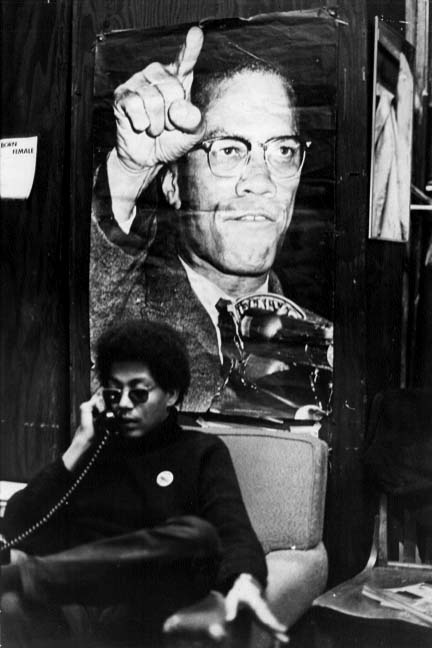 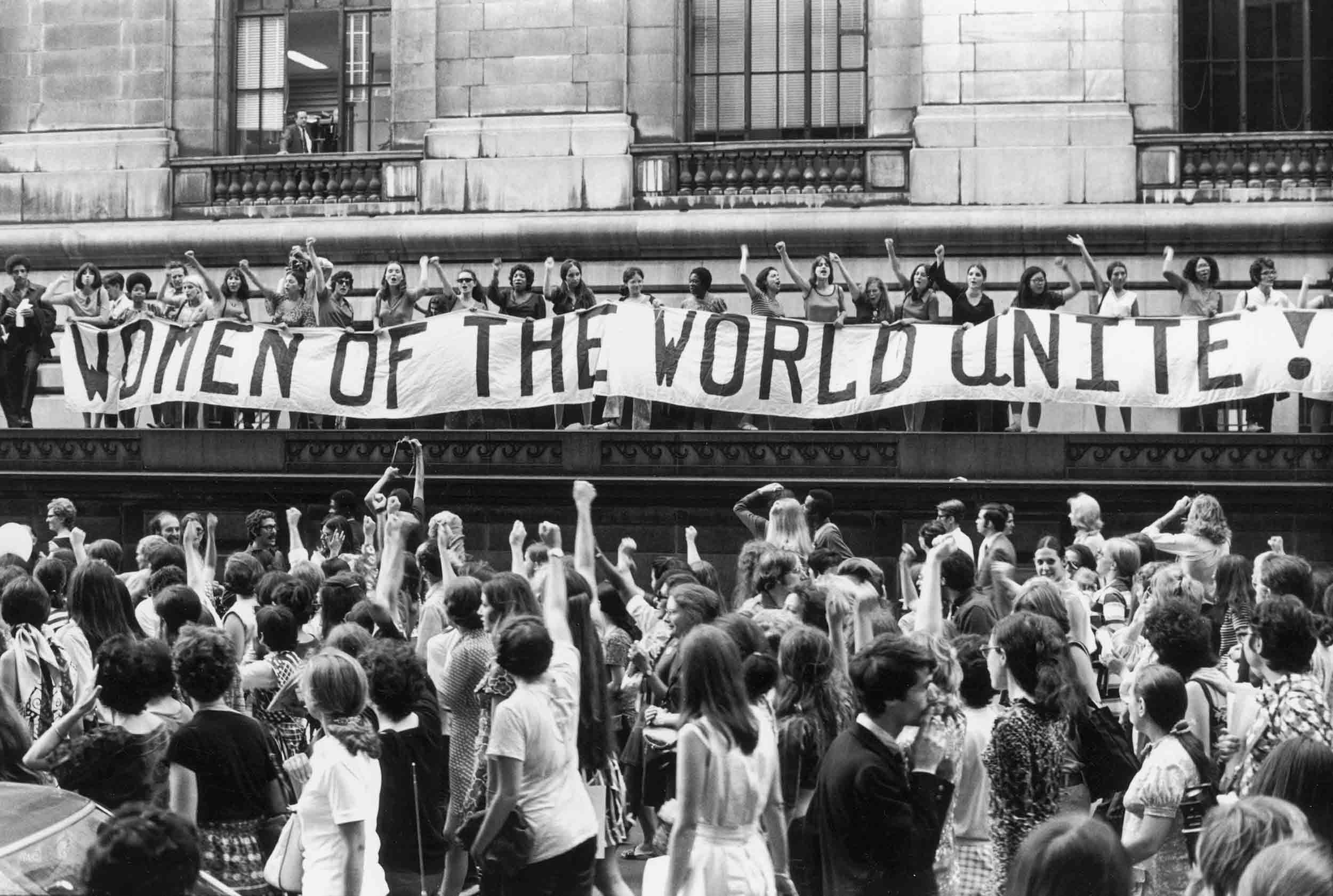 McDarrah made a series of powerful images over four days in the summer of 1967, as unrest took hold of Newark, New Jersey. On the evening of July 12th, white police officers arrested a black cab driver, John William Smith, for a traffic violation. He was then beaten by the officers but charged with assaulting them. Rumor spread that he had been beaten to death while in custody, sparking angry protests. 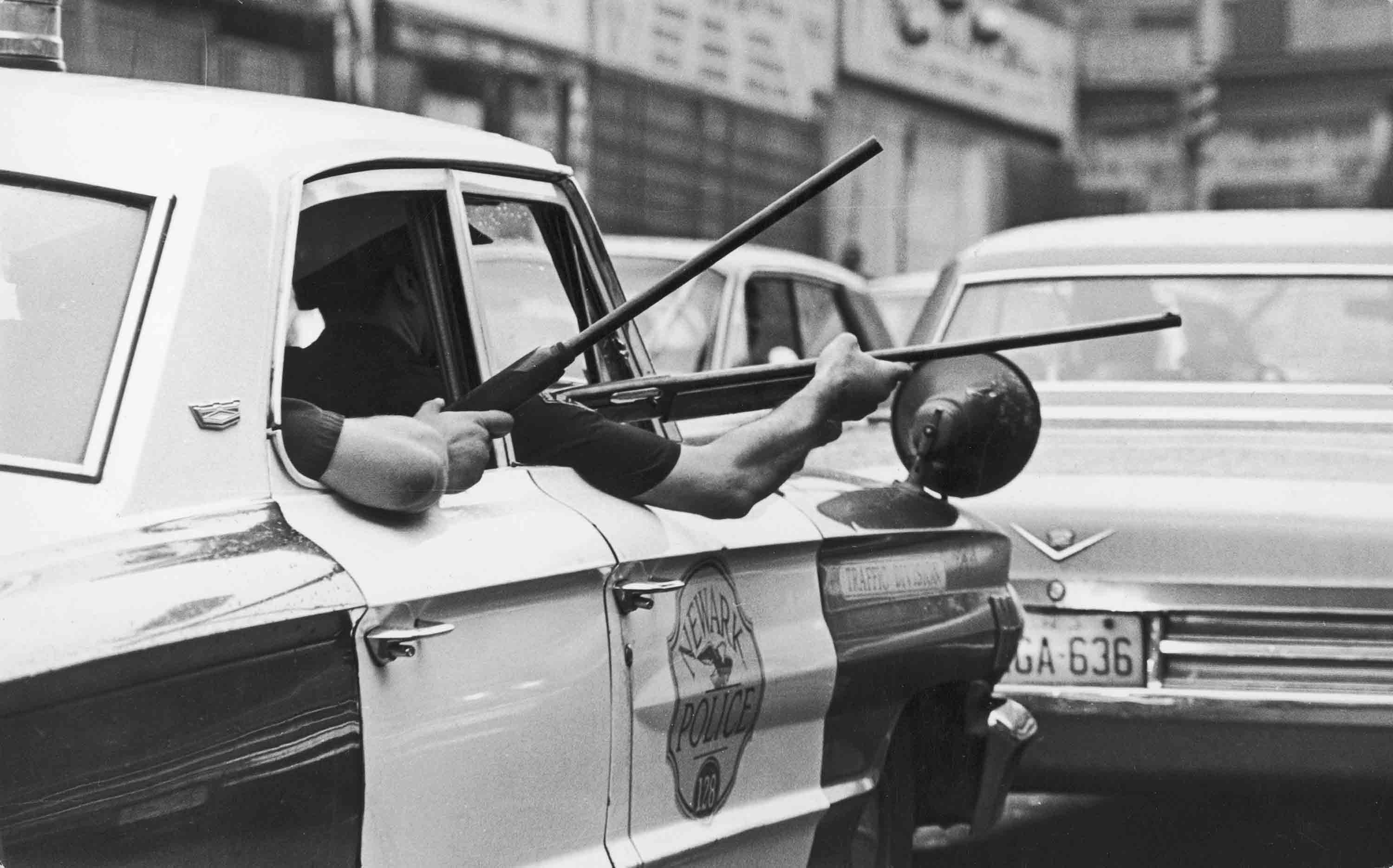 Police hold rifles out of the windows of a police cruiser during the Newark riots, Newark, July 14, 1967
The city of Newark faced looting, property destruction, and rioting which left 26 people dead and more than 1,000 injured. McDarrah captured images of roving police patrols armed with shotguns and the brutally beaten poet and activist Amiri Baraka. The event as a whole, along with such shocking images, left a stark and indelible mark on the public. 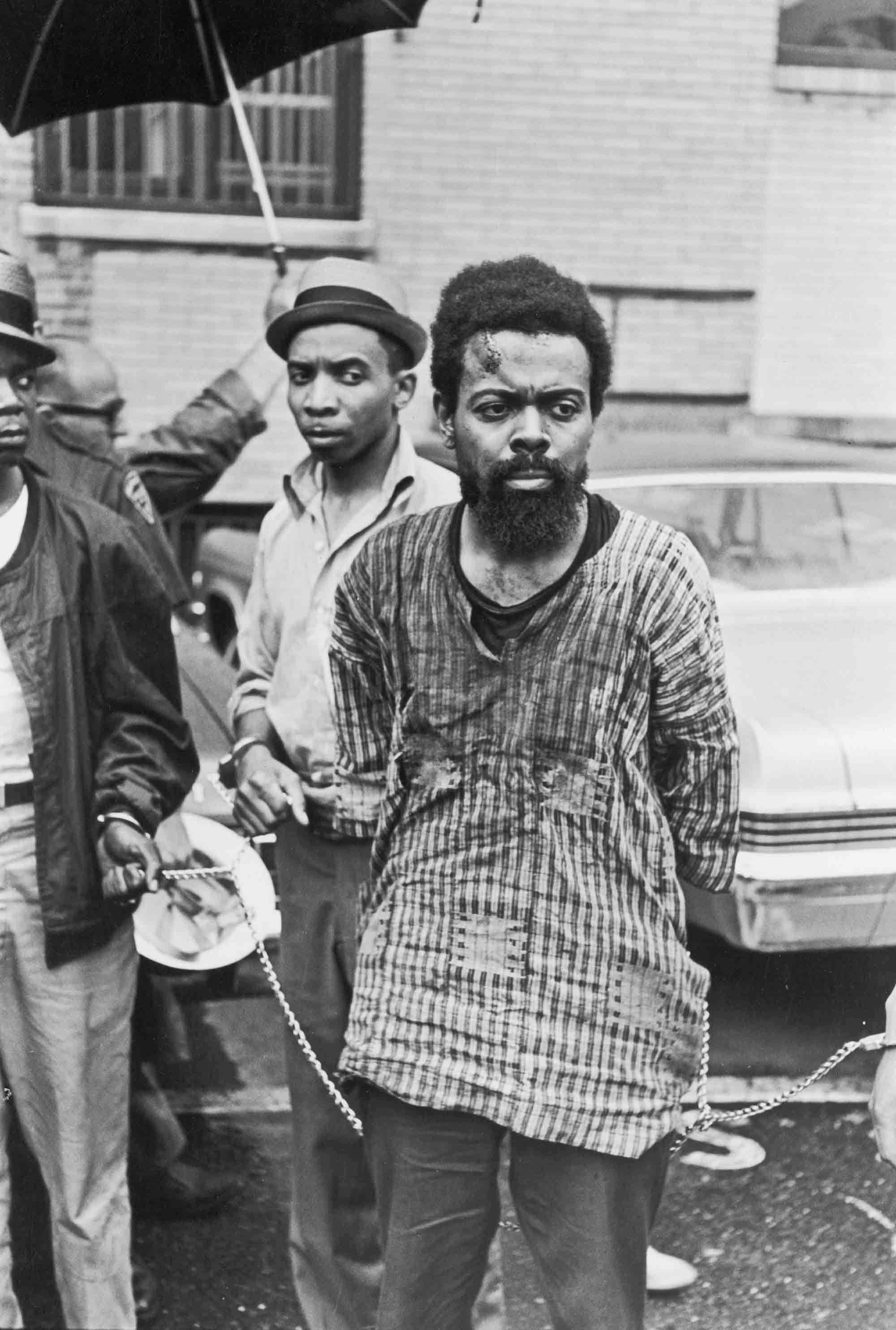 Amiri Baraka (formerly LeRoi Jones) arrested during the Newark Riots in Newark, NJ, July 14, 1967
Perhaps some of McDarrah’s most consequential photographs were taken over the weekend of June 27, 1969 when a series of spontaneous demonstrations began against a police raid of a Greenwich Village bar that was known to serve LGBTQ clientele—the Stonewall Inn. The demonstrations, today known as the Stonewall Uprising, marked a pivotal moment in the LGBTQ-rights movement when gay New Yorkers refused to accept the status quo. McDarrah was there and took some of the only existing photographs of the six days of protest and confrontation in front of the Stonewall Inn along with its aftermath. 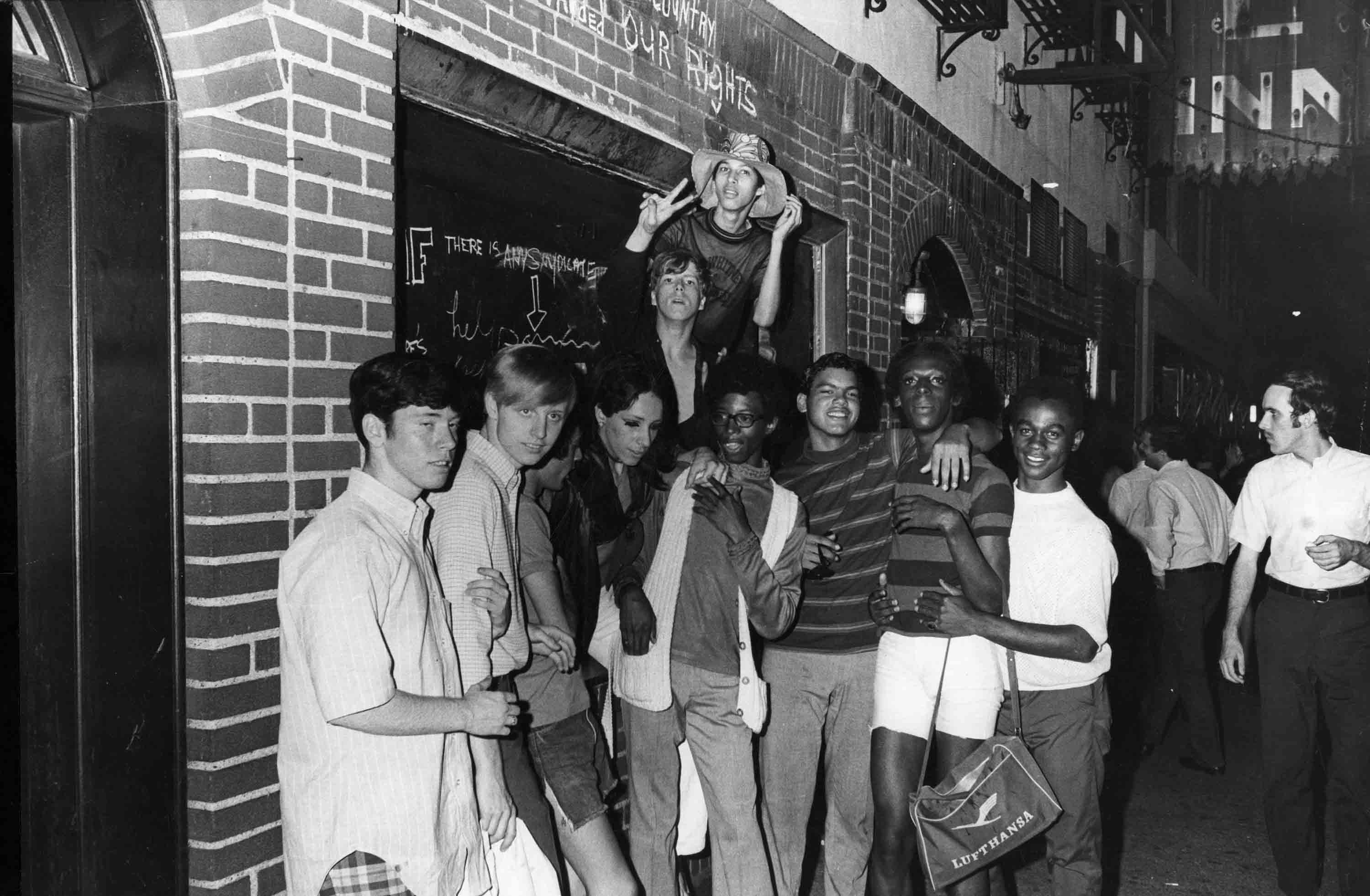 Young People Celebrate Outside Stonewall Inn After the Uprising, New York City, June 27, 1969
The Voice shared a block with the Stonewall Inn, so several of the staff writers urged McDarrah to take his camera down the street when the events unfolded, He went not knowing the future reverberations the moment would have. Yet, McDarrah had already covered the Mattachine Society’s “Sip in”, protesting New York liquor laws that prevented serving gay customers at Julius’ Bar in 1966. He would go on to cover the city’s first gay pride march in 1970 and continued to do so nearly every subsequent year. 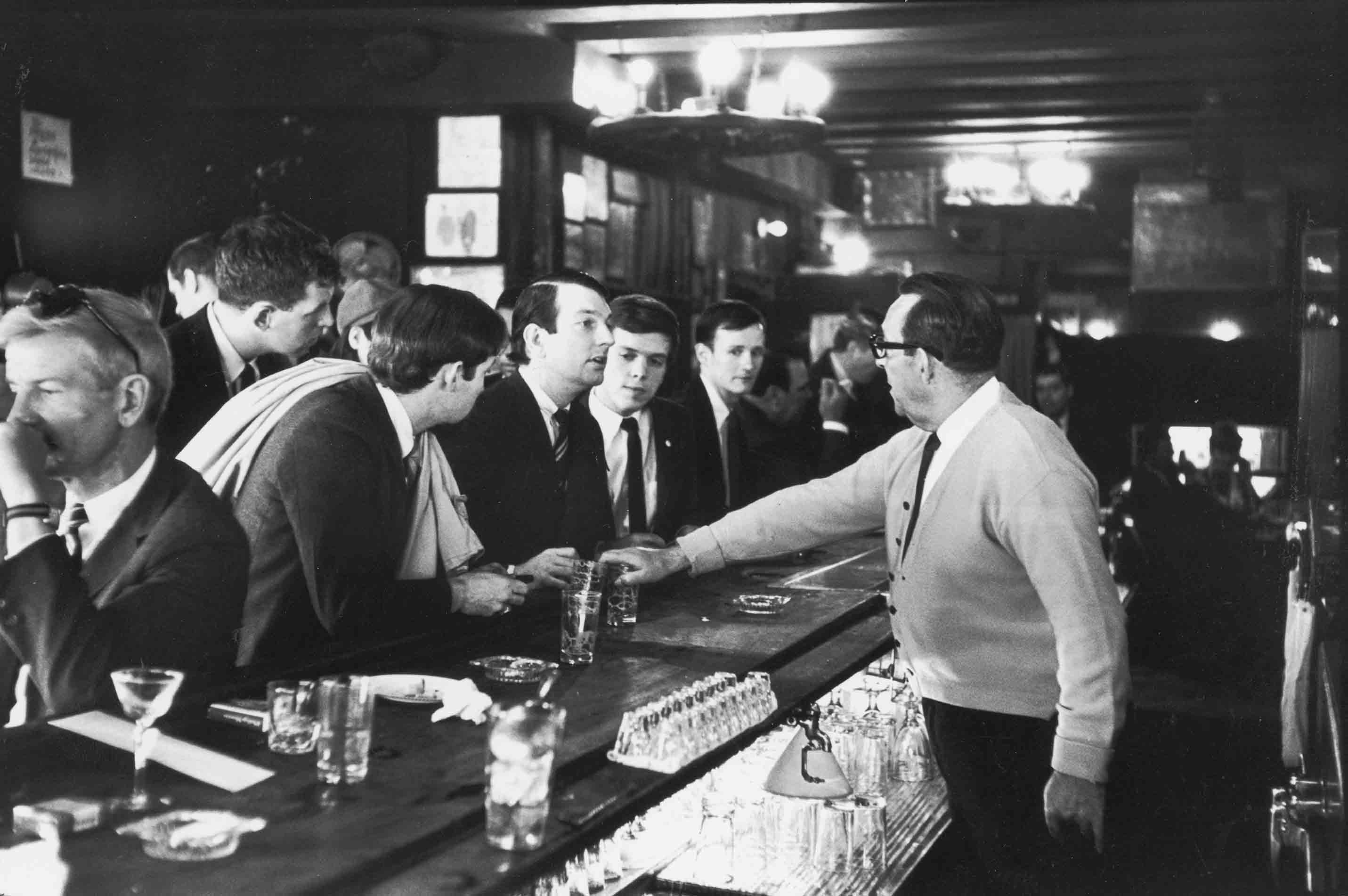 A bartender in Julius's Bar refuses to serve members of the Mattachine Society, an early American gay rights group, New York City, April 21, 1966
Looking back at McDarrah’s photographic archive, it is astonishing to consider how many pivotal moments in twentieth century American history he bared witness to. In fact, McDarrah’s documentation of a changing nation is a reminder of this nations ongoing struggle. Many of the issues at the center of the protest and activism McDarrah photographed in the 60s and 70s continue to dominate contemporary political. Although McDarrah’s images were primarily made with the Village Voice in mind, they also reflected his own political interests. As his family noted in a recent publication, “He generally supported the various social movements he covered, even if he was not of them. His politics were of inclusion and tolerance.”
McDarrah continued to photograph for the weekly paper for the rest of his life but as he hired on staff and took on the mantel of editor, he was less frequently “the man on the scene” and often left the work to his protégés. Still he remained loyal to the Village Voice, and its ideals, until the end.